2018 is complete and it’s been another 12 months to be proud of here at Crown Oil!

Professionally, we’ve further cemented our place as an industry leader thanks to our continued high levels of outstanding customer service, excellent prices and some very shrewd acquisitions to the Crown Oil Group. We’ve also continued to place a huge focus on community and charity work, which has meant that we’ve been involved in some wonderful projects and local causes since January.

We’re therefore very pleased to bring to you a summary of Crown Oil’s 2018!

COMPETITION WINNER – The result of our iPad competition was announced. Congratulations to Adam Newbury from QinetiQ, who started the year winning an iPad.

CUP GLORY – Premier League Tottenham played at the Crown Oil Arena in the FA Cup 5th round. The match finished 2-2 thanks to a 93rd-minute equaliser from Steve Davies. It was also thanks to a colossal effort from club staff, fans and local residents who worked tirelessly to keep the effects of the bad weather at bay so the game could go ahead. The draw meant a replay for The Dale at Wembley, where they eventually lost 6-1 but won a lot of friends along the way. 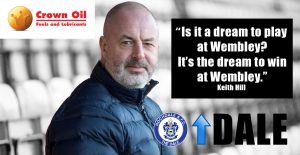 BRRRRRR! – The bad weather that threatened the FA Cup game against Tottenham was just part of the bigger spell of bad weather nicknamed ‘The Beast from the East’. Freezing weather from Siberia arrived over the UK, but the arctic conditions didn’t stop Crown Oil from making emergency deliveries of fuels and lubricants to the businesses and homes in need of extra supplies during the particularly cold weather.

BEAST FROM THE EAST – THE STATS – The storm officially ended on the 4th March, meaning it was affecting the UK mainland for nine days.

The construction industry was most heavily impacted, with experts calculating that £2bn was lost in the first three days alone as a result of work that couldn’t be completed and damage to machinery. It’s for this reason our cold weather lubricants saw an influx in sales.

In fact, the intensity of the weather was also reflected in the activity levels at our website; we recorded a 66% increase in web sessions versus the same period in 2017. That works out at 235,123 site visits. We’re proud of our capacity to provide emergency deliveries when our customers need them the most – like in the middle of a Siberian snow storm!

FAMOUS FOR FAME – We launched our FAME Biodiesel Guide, with everything you could ever want to know about ‘Fatty Acid Methyl Esters Diesel’. It’s used to replace or extend the life of mineral diesel and gas oils, generally in vehicle and static engines. Our position as industry leaders is not just as a result of our excellent customer service and customer satisfaction, it’s also thanks to our expert knowledge and product development.

FREE FUEL! – There were 1,000 litres of red diesel to be won as we launched our first fuel giveaway of the year. You didn’t have to jump through hoops to be a winner, you simply had to put your name in the draw! Aside from the advice and industry news, this is another reason why you should follow us on social media; so you can be in with a chance of winning next time!

YOU-LUBE – Our YouTube video, showcasing our lubricants and fuelshas been watched over 1.5 million times and increased to 1.6 million by the end of the year. Collectively, that is an amazing 2.8 million minutes of viewing time! Of course, if you are yet to subscribe to our YouTube channel, make sure you do get watching now.

BLOOMIN’ GOOD CAUSE! – We donated £700 to Heywood in Bloom, the nationally adopted scheme where towns and cities make their streets look as stunning as possible with floral decorations and gardens. We love community projects, especially the ones on our doorstep. 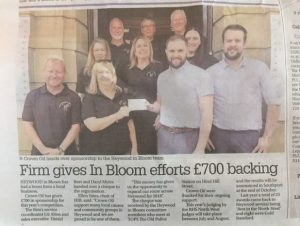 OASIS OF CALM – Work began on the ‘Wonder Wall’ outside Rochdale AFC’s Crown Oil Arena, a big part of the Rochdale in Bloom project. Crown Oil’s employee got their hands (and knees) dirty as they helped plant the beautiful selection of flowers and shrubs. Later in the year, we would all receive some brilliant new about everyone’s efforts… 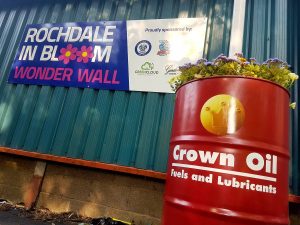 GREEN BY NAME AND NATURE – Since 2015, Crown Oil Environmental has been operating as the dedicated environmental services business of Crown Oil. Offering customers the support they need to ensure their fuel systems are operating safely, securely and efficiently. In July of 2018, Andy Green was appointed as the new Head of Sales, with the focus placed on further developing our outstanding customer service. In fact, a recent survey showed that 96% of Crown Environmental customers would recommend the service to a friend or colleague. So he’s clearly doing something right! 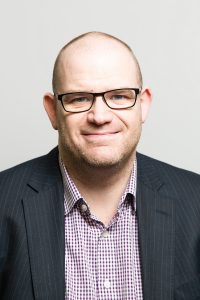 CARING FOR THE COMMUNITY We sponsored the Boomerang Centre, one of the largest multi-sensory centres in the Northwest. Our donation enabled the centre to run free exclusive sessions, giving families a safe and fun environment to play.

KENYA’ BELIEVE IT? – Local Bury girl, Laura Barrie embarked on a month-long trip to Africa, thanks to a donation from Crown Oil. Her time there involved helping in numerous community projects, such as beach cleaning and tree planting. 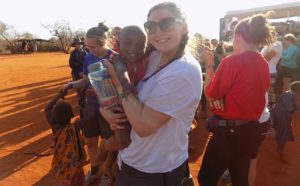 NEW CROWN FAMILY MEMBER – In September, we were delighted to announce the expansion of the Crown Oil Group with the acquisition of Beesley Fuels. Beesley Fuels has a history of being a family run business, just like Crown Oil, and their location in the West Midlands meant that we had yet another strategic location to assist with our excellent delivery times.

Later that month, we further expanded the Crown Oil Group when Birlem Oils became part of the company’s portfolio. Matthew Greensmith, Managing Director, said: “We are delighted with the acquisition of Birlem, which gives greater coverage in the South East to our Speedy brand. We have worked with the Buckley family for a number of years and they share the same values as us, so the business was a natural fit for the group”. 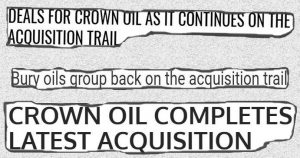 COMMUNITY CAFÉ – We were delighted to be able to sponsor The Friends of Hopwood Park which contributed towards the opening of the Tree House Café. They are now a well-established, low-cost community café, with customers ranging from school kids in the morning to retired couples meeting in the afternoon for a cuppa! For us, the Tree House Café is the epitome of a great local community initiative.

WINNERS! Rochdale town won the ‘Britain in Bloom’ National Gold Award in the Small City category. The Wonder Wall at the Crown Oil Arena was picked out by judges for special recognition.

I-H-Oh YEAH! – Sales of our Industrial Heating Oil (IHO) reached the 200 million litre mark. Yes, 200 million litres! IHO is a like-for-like replacement for red diesel as a fuel for commercial boilers for the generation of heat. Our IHO contains additives which actively clean and protect your burner system. For that reason, it has proven very popular in schools, hospitals and factories, as well as having industrial applications such as use in grain dryers. It is also a fully rebated product so it’s considerably cheaper than red diesel.

EXPERT FUELS INSIGHT – We launched ‘Rules for Fuels’, a regular ongoing informative series offering expert guidance and advice on a variety of fuel-related topics. Part 1 focused on the differences between winter grade and summer grade red diesel, with Part 2 the following month highlighting the dangers of using summer grade in winter. Keep an eye out for ongoing advice from our industry-leading chemists and engineers.

CHARITY DONATION – We once again enjoyed getting involved in a local good cause as Crown Oil employees donated non-perishable items to the Heywood Foodbank, a local community service which can literally be a lifesaver for many local residents.

THE SEASON OF GIVING – As the busy season kicked in and the demand escalated for our most popular products, including red diesel, industrial heating oil (IHO) and kerosene, our staff took the time to enjoy Christmas Jumper Day. Donations were made and that kitty was then used to buy toys and gifts for ‘Mission Christmas’, part of the Hits Radio’s Cash for Kids charity. Each present then goes to a less fortunate child in the North West.

Every Day of the Year

Crown Oil delivers premium fuels and lubricants across the UK, at low prices and with extraordinary levels of service to customers old and new, from all over the UK, 365 days a year.

As part of our commitment to our customers to provide the best prices and service, we couldn’t do it without the hard work put in by all of our teams within the Crown Oil Group.

So if you’re ready to become part of our growing team and join us in our journey, take a look at our current job vacancies to see where your new career leads you.